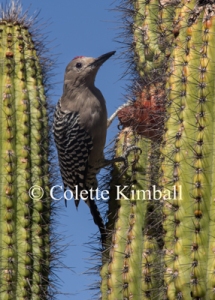 I am so happy to learn that my photograph “Gila Woodpecker” has been selected as a finalist for the 35th Annual College Photo Contest co-sponsored by Photographer’s Forum and Nikon.

My latest article in the Oregon Community Connection came out last month. It was about enjoying winter on the Oregon coast.

Winter happens to be one of my favorite times to visit the Oregon coast and when the publisher asked me to write an article about it, I had tons of things I could have said.

Best of all… I received the nicest email today from an acquaintance of mine. She wrote, in part, “I just finished your article on ‘Enjoying Your Winter on the Oregon Coast.’ It is so well written….I felt like I was there! It also is helpful for us as we want to plan some activities along the coast next fall so having a listing of November activities is very nice!”

When I was associate editor at The Prevention Researcher, I would occasionally get nice emails from my authors or emails from our readers about how a specific issue was helpful for them. I think this is the first time, though, that I have received such a nice, unsolicited comment about my writing. 🙂

Of course, with my background in public health and psychology, and with years behind me as associate editor of The Prevention Researcher, I saw it as a great opportunity to not only write about amazing people but also promote great local non-profit organizations and also encourage people to get involved themselves.

For my first article, I picked a topic that was dear to my heart — helping youth in foster care. Talking with Mavis and Katrina at A Family for Every Child was a treat, and I am looking forward to more articles. It is a truly enjoyable experience to talk with people about a good cause that they are passionate about.

For many years I listened to the radio show “The Natural World” on my morning commute. The Natural World was broadcast on KLCC and hosted by John Cooney, who would travel around the Valley exploring the world around us. Within his broadcasts John always included the sounds of our natural world in the background — usually birds chirping and water flowing.

In November I learned that John was in hospice. The news caused me to reflect on the inspiration he had given me over the years. Of course I was inspired to explore the places he had been, however I also realized that John had inspired me creatively as well.

Using these sounds I created an “audio card” to share with John, thanking him for the years of inspiration that he provided. Not knowing John or his circumstances, I created the audio card quickly and sent it to him as soon as I could.

Now, with my class was over, I have remixed the audio and uploaded the podcast to SoundCloud. I also created an accompanying image which I think shows the merging of nature and sound.

Fall term is finished, which means that I put the finishing touches on my Audio Production project. I worked on this project all term as we learned about sound, microphones, recording, and ProTools.

For this project, we were given about 30 movie clips to chose from. I chose this scene from “Oz Great and Powerful” for two reasons — first because I knew my friend Jim would do an awesome job doing the voice over for Oz, and second, because I loved all the bird noises in the background.

In all, I recorded about 85% of these sounds. My goal had been 100% but honestly, recording can take a lot of time! Hearing it come together, and especially at the end when I began to run all the sounds through the equalizers and hearing how they became richer and more engaging, was exciting. It was also a lot of fun seeing and hearing it being played on the theater on campus. 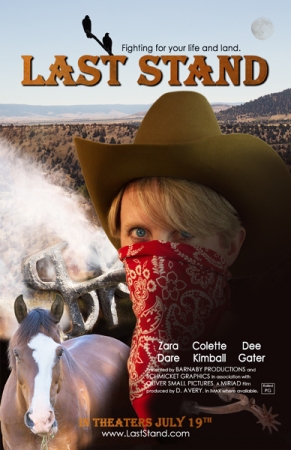 The Digital Imaging class I am taking at LCC this summer is keeping me busy. Primarily the class is about PhotoShop, and while I’ve been using PhotoShop for years, formally learning it has revealed how much I didn’t know. It has also reveal how complex PhotoShop is. I think you could use it professionally for years and still have aspects you haven’t touched yet.

Our second project for the term was the creation of a movie poster. It had to be a fictitious movie and all of the images in the poster had to be taken specifically for this project. We also had to be the stars of our own movie.

I chose a western theme, partially so I could use some of the family heirlooms I had recently acquired, and partially because it seemed uncharacteristic for me. I like my final project, especially the printed version which seems richer than the digital version.

I am excited that a recent photograph of mine appeared on the front page (above the fold!) of our local newspaper, the Cottage Grove Sentinel. 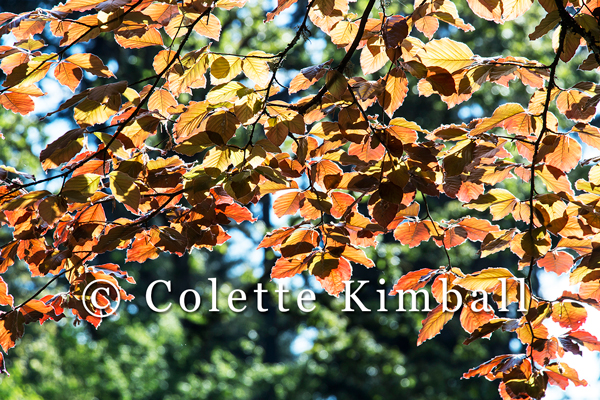 Earlier this spring I spent a beautiful morning at Hendricks Park in Eugene taking photographs of the rhododendron flowers for a class project. The morning light was beautiful, and when I noticed it shining through the new leaves of a tree above the path, I knew I had to take a photograph.

With encouragement from my fellow students, I submitted the photo to the spring LCC media arts student exhibition — a juried student art show held on campus in the Glass Gallery. It made it into the show! What a treat to see it on display at the gallery. 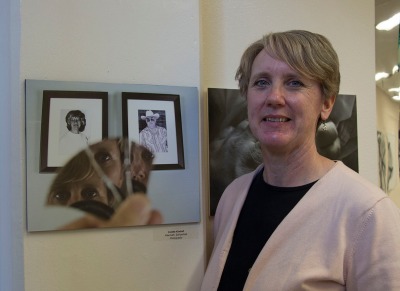 With my photograph “Aftermath: Self-portrait” at the opening reception to The Big “C” art show.

When I was just 3 weeks into the multimedia design program at Lane Community College, I learned about an upcoming juried student art show titled The Big “C”. The goal was to reflect on how cancer had impacted our lives.

Having recently lost both of my parents to cancer, I felt strongly compelled to enter. The project definitely took me out of my comfort zone in so many respects, but in the end, my photograph made it in to the show.

Cover of Creative Spirit: Expressions of Art and Sport

Earlier this year I had the wonderful opportunity to be the managing editor for the just published book Creative Spirit: Expressions of Art and Sport.

The book combines the art work of young athletes (roughly ages 5 through 18) with the art work of past Olympic athletes. My role was to coordinate the selection of the youth artwork (which had already been submitted for other projects), then conceptualize and design the layout. I used InDesign to layout the interior pages and PhotoShop to design the cover.